The quadriceps femoris muscles (quads) are the most voluminous muscles in the body— the quad muscles together contain more mass than any other muscle group— the general population knows where their quads are: on the front of the thigh between the hip and knee joints. What may not be as familiar are the names and functions of each individual quad muscle. As the name suggests (quad is the Latin word for four), we have four quadriceps muscles— rectus femoris and three vastus muscles.

Though we may understand the quads as a unit, understanding each of the vastus muscles gives us greater insight into how to train and protect this powerful muscle group.

As a whole, the primary purposes of the quads are hip flexion and knee extension.

We use them when we run, walk, kick, and jump (and squat and lunge!). These thigh muscles support us not only in sports, but are essential for daily activities like climbing the stairs and getting up from a chair.

However, when we look at the individual muscles that make up the quads, we see that rectus femoris is the only muscle of the four which crosses both the hip and knee joints, and thus, the only one to be primarily involved in hip flexion.

The vastus muscles, then, all play a primary role in the quads’ other main function— knee extension. 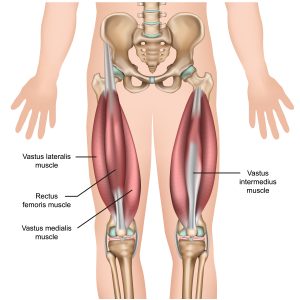 Vastus medialis is the smallest of the group, and is positioned medially on the femur. It extends the entire length of the thigh, originating at the medial side of the femur and inserting into the quadriceps tendon. Its function is to extend the knee, to stabilize the patella, and to help correct patellar tracking.

Vastus lateralis, found laterally on the thigh, is the largest of the quad group. It originates from several sites on the femur– the intertrochanteric line, the greater trochanter, gluteal tuberosity, and linea aspera– and attaches to the outer border of the patella. Its function is to extend the lower leg and to support the body in rising up from a squat position.

Vastus intermedius is the deepest of the four quadriceps muscles, located in the middle of the thigh, beneath rectus femoris and in between vastus lateralis and vastus medialis. It originates at the anterior and lateral surface of the femur and inserts in the quadriceps tendon. Its primary purpose, like the others, is knee extension. Because of its location, of all the quad muscles, vastus intermedius is the most challenging to stretch and to massage (without being limited by the other quad muscles).

In recent years, a slanted muscle was discovered between vastus lateralis and vastus intermedius. Because of its location, this fifth quad muscle has been called the tensor of vastus intermedius, but its specific function is still being studied.

The quads handle a lot of strain from the hip and knee joints, which makes them vulnerable to injury. In addition to their primary functions, the quads also absorb force when the foot strikes the ground and help to regulate gait. Strength training the quads can help to protect them and the joints they support.

Knowing that the vastus muscles are primarily involved in knee extension and stabilization, we can also understand that exercises including these actions are important for strengthening them. Stability exercises and performing leg extensions can help to prepare the quads for higher impact movements like running, jumping, and kicking. In athletes like runners, who tend to have hamstring dominance and underdeveloped quads, strengthening these muscles is especially important to correct imbalances that could result in injury.

While understanding the quads as a muscle group is often sufficient, understanding each individual muscle and each of their specific functions and locations can help with more focused training and intentional programming.

About the Author: Kellen Nyemb

Kellen is a yoga teacher and personal trainer with a background in psychology. She is a former college track and field athlete and has a passion for working with athletes. Her trainings and certifications include thousands of hours of yoga training, physical therapy based LYT Yoga Level 1, various trainings in orthopedic considerations and foam rolling and myofascial release. She enjoys sharing anatomy knowledge with others so that they can feel empowered through learning about their own bodies. Her background in psychology and yoga influences her work as a personal trainer, with an emphasis on mindfulness in movement and its ability to support mental health.