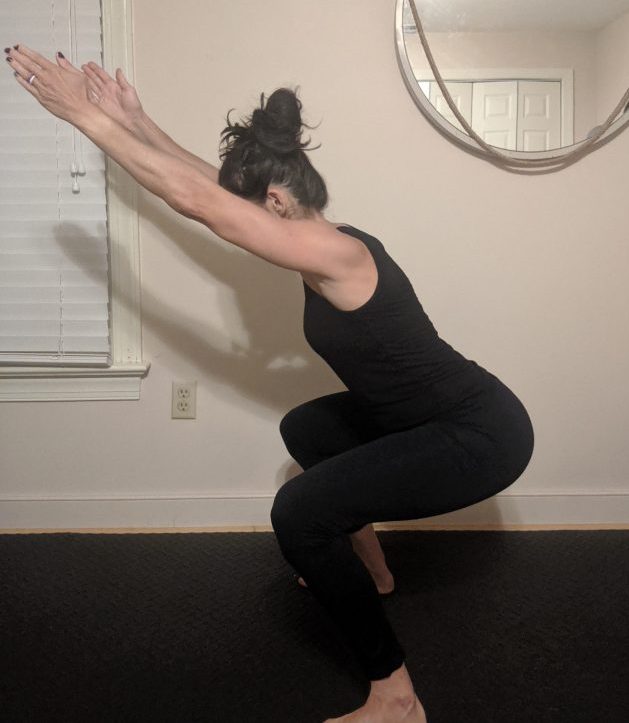 Interpreting the noted signs of an Overhead Squat Assessment (OHSA) can help a trainer identify muscle imbalances, such as which muscles are long and weak, or short and tight, or maybe even long and overactive. Interpreting the signs can help identify syndromes such as lumbo pelvic hip complex dysfunction (LPHCD), or the structures related to the kinetic functioning of the lumbar spine, SI-joint, hip and knee joints.

Features of LPHCD, specifically anterior pelvic tilt, is often associated with low back pain. Even if pain isn’t currently present, continuing to reinforce dysfunction with programs that do not correct the muscle imbalances may possibly lead to over use injuries, perceived muscle tension, or unachieved fitness goals.

Ultimately, interpreting these signs can help a fitness professional implement a corrective exercise strategy before piling on heavy programming that may continue to reinforce faulty movement patterns, or perhaps even cause injury.

I discussed the signs of lower extremity dysfunction last, and certainly there is often overlap with these signs which is why it is helpful to do a modified OHSA to determine where exactly the problems may be originating from:

If upon initial OHSA, any of the following signs are still present after placing a riser under the heels AND placing hands on hips, then it is safe to acknowledge that the problem is more likely to be originating in the lumbo pelvic hip complex (LPHC).

If the signs below are still present but improve with the modification, then it’s likely both Lower Extremeity Dysfunction (LED) and LPHCD require corrective attention. Start by correcting LED issues first.

Signs of LPHCD and What They Mean

The photo below is greatly exaggerated. More commonly, the patella would track over the pinky toe rather than the second/third toe, as is ideal. Although it would appear that this compensation is a result of overactive abductors (like glute medius?) , it tends to be more of a function of overactive femoral external rotators.

The deep hip rotators may exhibit dysfunction and inhibition of the gluteus maximus and the gluteus medius which ultimately results in the deep rotators overactivity, contributing to knees that bow out. These muscles becomes synergistically dominant along with the biceps femoris and the posterior head of the adductor magnus during hip extension (or eccentric flexion).

If these aforementioned smaller muscles become overactive, you can bet the glute max and medius are not doing their jobs. Activating and strengthening those inherently more powerful hip extensors should be prioritized along with releasing and lengthening the deep rotators.

Similarly to knees bowing out, knees bowing in also point to LPHCD. The photo below depicts a pretty obvious and extreme example of this, but recall that you must watch the client closely as they perform the OHS. There may be a short but visible moment turning over from eccentric to concentric squatting that a little adducting “bounce” can be detected at the knees. This would be a positive sign for knees bow in.

Like knees bow out, the glute complex should be activated and strengthened.

For many people, you don’t even need to perform an OHSA to see excessive lordosis. It’s often clear in a static posture by observing the angle between the ASIS and the PSIS. An overt lumbar curvature at the bottom of the squat, however, is also indicative of excessive lordosis. If you’re unsure, try to draw an imaginary perpendicular line from the pelvis to the spine. Too much anterior tilting of the pelvis will change that angle from 90 degrees to closer to 60 degrees.

The overactive muscles involved in excessive lordosis are the lumbar extensors: erector spinae and lats; and hip flexors: iliopsoas, anterior adductors, rectus femoris and that pesky TFL again. The ones that need strengthening are the lumbar flexors and deep core muscles: rectus abdominus, TVA and obliques; and hip extensors: glute max and medius.

Leave the posterior adductors and hamstrings alone—they are long and under tension but will likely restore to normal function if the above issues are corrected.

*Note: As previously mentioned, when  the sign of excessive lordosis is present, it can be attributed any of the dysfunctions. To pinpoint which, have the OHSA performed with a heel rise and hands on hips. If the anterior pelvic tilt disappears when heels are high, then it’s a LED problem. If it disappears with hands on hips, then it’s an UBD issue. If the problem remains with BOTH of those modifications, then you can blame LPHCD. Does the tilt improve a bit but not disappear completely? Then it’s probably a little bit of each.

This one is the toughest to imprint as a sign of LPHCD. Thus far, research has not demonstrated a relationship between low back pain and overactive lats (or loss of shoulder flexion—-in this case, the sign of arms falling during a squat). However, that does not mean that overactive lats aren’t contributing to the problem of an anterior pelvic tilt which is correlated with low back pain.

You have to remember that the lats connect the upper body to the lower body, from humerus to an investment in the ilium. That’s a pretty long way. Where they end up looking short can vary from person to person.

Note that short, overactive lats are associated with an excessive lordosis. Now imagine someone has short lats, but maybe no anterior pelvic tilt. Where might that tension translate if not at the low back?

It can translate into shoulder internal rotation and lack of shoulder extension. Arms fall! 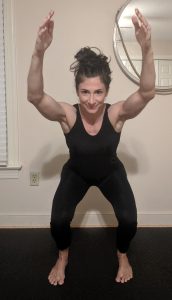 That’s not to say someone can’t have signs of excessive lordosis and arms falling… Certainly if the lats are really short you’ll probably see both.

Arms falling either forward (into shoulder extension) or outward (into abduction) indicate that the lats are tight and likely contributing to LPHCD or UBD. Release and lengthen the lats when arms fall and/or with an excessive lordosis.

What To Do With Noted Signs of Dysfunction

There is little point to identifying dysfunction without plans to correct it. Corrective exercise involves releasing tight and/or overactive muscles then lengthening them if they are short (muscles can indeed be overactive and long) with static and dynamic stretching. Simultaneously, the opposing, weak musculature should be activated and strengthened.

Familiarizing yourself with anatomy and joint actions is crucial for moving forward with corrective exercise. These are steps to take before integrative exercises can be implemented and OHSA re-assessed to note any progress.

Stay tuned for the next blog analyzing signs of Upper Body Dysfunction (UBD).

*The above concepts are directly adapted from the Brookbush Institute and its Human Movement Specialist certification which I am currently pursuing.