IT Band Syndrome: It’s Not Your IT Band!

Ouch. IT band trouble is no joke, and with over 5 million views on the first page of YouTube alone, it’s obviously a problem people are looking to solve. Prepare for your mind to be blown as we delve into the real reason behind IT band pain.

A little history here: Foam rolling is over 30 years old…and that’s all the history you need to know! Current iterations of our foamy friends usually include corrugated surfaces, variable foam densities, and even vibratory sensations that pulse waves of mechanical pressure through our tissues.

My take? All of these are fantastic tools, but a smart trainer uses the right tool at the right time….and on the right spot. But foam rolling over your IT band is, frankly, a bad joke nowadays. Why? Well, let’s get into the anatomy to find out! 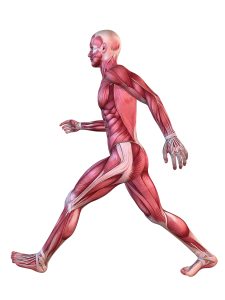 Anatomy of Leg and Hip Musculature

The IT band, or iliotibial band, is just a thick band of connective tissue that acts as a lateral stabilizer, connecting the big outer ridge of our ilium to our tibia, (just below the knee joint, laterally). Embedded at the top of the IT band, functioning as a tension moderator, is our lovely little TFL, or tensor fascia latae, meaning “Wide fascial tensor”. The TFL is a muscle despite the word “fascia’ confusing matters, but its insertion flows seamlessly into the fascia of the IT Band.

Fascial considerations, or rather, other structures that can tug at this band via the fascial highway or direct connections include the obliques, the glutes, the peroneals (fibularis group) on the lateral calf, and of course, the lateral quad muscle, the vastus lateralis. Yes, the super-mega-big-giant-huge-colossal muscle that sits immediately under the IT band could possibly-maybe-perhaps play a super-mega-big-giant-huge-colossal role in the functioning of this band.

Foam rolling seems to be a go-to as far as IT band pain is concerned, at least over this tissue itself. As a tool, foam rolling really only improves fluid dynamics and exerts a mild neurological stimulating effect on areas rolled over. As the pressure from the curved surface digs across our tissues, the roller essentially bull-dozes superficial fluids (blood/lymph) out of the way, and a wake of negative pressure is left, pulling in newer blood-flow to fill the space.

Rolling over the band itself, this would be considered overkill, not to mention very painful. When we’re in pain, things tighten up. I’d argue here that there’s no point to causing more tightness and pain in a tight and painful area that really is just thick connective tissue, which requires no significant blood flow to function.

The gurus that claim to have solved IT band syndrome are certainly on the right path. Each, in their own way, comments on using the roller more specifically, targeting the bellies of the muscles actually responsible for the IT band. These include rolling or lacrosse-balling on the aforementioned TFL muscle, glute max, and gluteus medius. Excellent thinking here, and certainly more effective than the prior option.

Other practitioners, including Chiros, PTs, and ATCs, might blame mechanics. IT band syndrome is, by its nature, an overuse injury, and their thinking here is that if your hip is not tracking properly through a stride (either too much external or internal rotation), then the IT band no longer is acting as a stabilizer, but forced into part-time labor as a compensational hamstring or quad fiber.

This causes more irritation and rubbing at the knee joint, and BAM…Syndrome Town…population: You.

More discerning practitioners will help to isolate the issue; sometimes lack of mobility or strength at the hip, other times lack of strength or mobility at the knee, ankle, or even big toe can be to blame. There are about a thousand ways to fix these biomechanical issues and most of these approaches have great outcomes.

It’s not your IT band. It’s your vastus lateralis. Take a deep, long look at any anatomical depiction of the IT band and then match it with a deep, long breath, for you have now seen the light! When we complain about the IT band, we’re typically referring to chronic repetitive stress occurring at or around the lateral knee, which translates to a tension issue.

When we then trackback to finding the muscles that control the tension at the lateral knee, we discover the TFL/Glute complex and can easily address those particular muscles in our favorite ways. This might help a lot, but does the problem go away completely? Likely not.

There’s a reason why those muscles are staying tight: they’re also overused and compensating for improper biomechanics. But why are the biomechanics improper?!?! My assertion: Adhesion between the IT band and lateral quad are playing tug-of-war, and guess who’s losing?

We know both overuse and underuse can cause adhesion. In the case of the office worker seated for eight hours a day,  underuse is the cause. In the case of a marathoner, it’s overuse. Any mix of those two could yield the same outcome, as well. If we look at this IT band issue from the beginning, it starts to make more sense:

Is There An Easy Fix?

Now that you have a better idea of the etiology of this tightness at the IT band, you’ll have a better path to success with reducing the tension and irritation. My goal is always to get it gone 100%. Since we’re dealing with adhesion, mobility work is really the key. As a sports chiro, I’m allowed to have my hands on people, using soft tissue techniques like ART or MRT, Graston or IASTM, and Cupping to help my clients to find relief, but as a personal trainer, you might not!

My suggestion: Banded flossing, the application of a narrow latex band wrapped around the limb, is a GREAT way to help get past the pesky adhesions, and after that, it’s as simple as calming down the leftover tightnesses in the TFL and Glutes. (A lacrosse ball or foam roller will certainly do the trick to release trigger points or adhesions in the muscle bellies).

The floss compresses the IT Band and Quad together and puts a greater strain on the tug-of-war action. The safe bet here is that the adhesions themselves break up without further irritating the quad or ITB. I typically will do some activities like my squat “shapes”, as I demonstrate in the video, to shear those tissues for about 2 minutes, maybe twice, before getting out the roller or lacrosse ball and doing some compression work on TFL or Glute Med/Max for 20 seconds, three times per spot.

Then I roll my IT band…JUST KIDDING.

But a pro tip here is to roll the anterior AND posterior aspects of the lateral quad without squashing your ITB. I do this by internally or externally rotating my thigh while I’m also rolling my quad and hamstring, respectively.

About the Author: Patrick Silva, DC