Knee pain and complaints are common amongst fitness clients. A clear understanding of the internal knee and knee function supports knowledge for restorative knee exercise programming, progressions, and regressions. 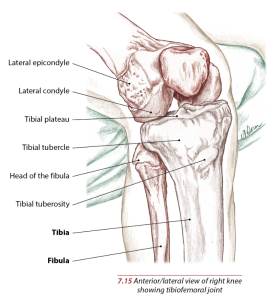 The knee is the junction of the femur, tibia, fibula, and patella bones. Ligaments, tendons, fascia, and muscle connect the joint and allow movement.

Technically named a synovial joint, the knee is more specifically referred to as a “hinge” joint for it’s linear and door like movement patterns. When the knee is flexed it can, in fact, perform internal and external rotation!

The knee joint has four ligaments along with the menisci, a type of hybrid cartilage/ligament that acts as a shock-absorbing barrier between the articular cartilage on the ends of the femur and tibia.

The LCL is also called the “fibular collateral ligament” because it connects the lateral femur and fibula. LCL limits the sideways motion of the knee. Any hyper or excessive movement in which the knee has to over stabilize against a sudden change of direction that the surrounding musculature can’t control could damage this ligament.

The MCL is also called the “tibular collateral ligament” because its attachment sites connect the medial femur and tibia. Like the LCL, the MCL limits the sideways motion of the knee and is generally injured when the stress of quickly changing directions overpowers the force and stabilizing abilities of the surrounding musculature.

LCL and MCL Causes of Injury

Anytime the knee is subject to sideways motion the LCL and MCL are prone to injury. Sports like racquetball, tennis, basketball, football, and soccer are places for potential injury. Also, stepping out of a car, bumping a corner in a grocery store aisle, or missing a step while walking can place lateral-medial stress on the knee.

MCL tears are classified by their severity into three categories.

LCL injuries are the complete opposite of MCL tears. They occur when the inside (medial part) of the knee is struck and pushed out or in sports where there are a lot of quick stops and turns as in soccer, basketball and skiing. LCL injuries are also classified by their severity with the classifications and symptoms similar to those of the MCL. However, the LCL does not heal as well as the MCL and in most cases a Grade 3 injury will require surgery. 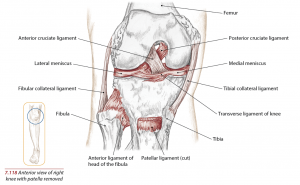 The word “cruciate” means crossing from one side to the other and/or one over the other. The ACL connects the femur to the tibia along the front center part of the knee. Specifically, one end connects to the anterior tibia along the medial side of the tibias’ sagittal line.

The other end connects to the deep portion (almost to the rear but not quite) of the femur along the lateral side of the femur’s sagittal line. If you look carefully you can identify a slight diagonal angle to this ligament.

The ACL, one of the most common ligaments injured in sports, is responsible for controlling the allowable rotation of the knee along with limiting the forward trajection of the tibia under the femur during, but not limited to, squatting, lunging, landing, running, and walking.

The ACL is most commonly injured quick rotational movements where the foot is planted but the upper body is changing directions in a rotational fashion. Imagine a basketball player coming down from a rebound and accelerating with the upper torso in a direction opposite to how the feet are grounded without pivoting. Ouch!

The PCL is the strongest ligament and primary stabilizer of the knee, also connecting the femur to the tibia but through the posterior side.  The PCL limits the backward motion of the knee and may also prevent medial-lateral (side-to-side) and rotary movements.

Another injury prone example would be someone washing dishes with both feet grounded and abruptly twisting the upper torso, hips, and femur in directions opposite to those in which the feet are facing without allowing for a slight pivot or complete re-positioning of the foot.

An ACL tear is most often a sports related injury but can also occur during rough play, auto accidents, falls and work related injuries. Most ACL injuries in sports happen when pivoting or landing from a jump. Similar to meniscus injuries, patients of ACL tears often feel a “pop” and the knee usually gives out underneath them.

Subsequent pain and swelling is to be expected. ACL tears do not necessarily require surgery. According to Doctor Jonathan Cluett, Board Certified Orthopedic Surgeon in Massachusetts, your daily activities and demands should be considered prior to opting for surgery.

For instance, do you regularly perform activities such as football, soccer, basketball, skiing, gymnastics, hockey, wrestling, lacrosse, rugby, singles tennis or cheerleading that require a normally functioning ACL? Secondly, is your knee stable? If not, you may not need ACL surgery. Many patients with ACL injuries feel better within a few weeks. The only persistent problem may be instability.

PCL injuries are most commonly experienced when the knee is bent and an object forcefully strikes the shin backwards. This type of injury can be experienced in a car collision when the shin strikes the dashboard. The other mechanism of injuring the PCL is in sports when an athlete falls on the front of the knee. The knee is hyperflexed with the foot held in a pointing downwards position. Symptoms of PCL injuries are quite similar to those of ACL injuries. In the weeks following the injury patients state that they can’t trust their knee or that it feels as it is going to give out.

Cartilage, sometimes referred to as “articular cartilage”, can be found at the end of the fibula, tibia, fibula, and behind the patella. Cartilage is a type of connective tissue that has no blood vessels or lymphatics, which makes it a type of tissue that is very slow to heal. It also has no nerves and is therefore insensitive.

A major function of cartilage is to absorb impact, especially in the knees, and transfer forces in a pain-free manner. 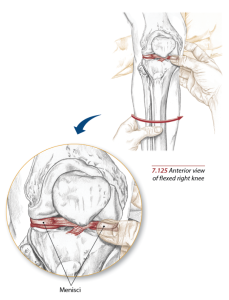 In the knee, there are two types of cartilage:

Ligaments, which connect one bone to another, are composed of approximately 70% water and 30% organic matrix along with fibrocytes, the specific type of cells that make up tendons and ligaments.1,2

The organic matrix is a combination of ground substance (a combination of protein and carbohydrate complexes forming a gel-like substance) and collagen. In ligaments and tendons, 90% of the Organic Substance is collagen.

Collagen comprises 25 to 30% of the protein in the body with at least 15 types of collagens currently known with more recent studies identifying more than 20 types!2,4 Collagen production in the body can vary from individual to individual with the aging process and genetics playing the biggest role in the ability to make adequate amounts for tissue repair and maintenance.

In tendons and ligaments, the type of collagen found is called Type 1, which identifies its structural alignment, splice variants, and function when compared to the other many types of collagen in the body. 3, 4

Type 1 collagen fibers tend to be more rigid than Type 2. Hence, the ability to withstand the forces generated by movement and keep the bones they hold together without a daily injury. Cartilage, which covers the end of all bones that touch each other, is a bit different in its composition when compared to ligaments and tendons.

When discussing the ligaments above and as will be discussed in part 2 of this series when we cover tendons, the cells that make up those structures are called “fibrocytes”. In cartilage, the cells are called chondrocytes and the type of collagen is Type 2 as compared with Type 1 in tendons and ligaments.1,6,7

In the human body, we can find three (3) types of cartilage:

Chondromalacia Patella is the degeneration of the cartilage between your patella and femur. Your kneecap, which sits over the front of the knee joint, glides over the Femur as your knee bends or extends. Chondromalacia Patella (also called “Patellofemoral Syndrome”, “Runners Knee”, “Patellar Tendinitis” or “Jumpers Knee”) begins when the kneecap does not move properly and rubs against the lower part of the femur.

Symptoms of Chondromalacia Patella are pain behind, below or on the sides of the kneecap being more noticeable while climbing up or down stairs, performing deep knee bends, standing for long periods and running downhill.

Prepatellar Bursitis is the common cause of swelling and pain on top of the kneecap. The bursa are thin sacks filled with the body’s own natural lubricating fluid. The bursa are very thin slippery sacks that are situated around our joints to prevent muscles, tendons and skin from catching on bony surfaces throughout the body.

When there is trauma, repetitive use or injuries to the knee, the bursa can swell and either fill up with blood or fluid, which in turn causes pain and swelling of the knee. If the trauma is associated with a tear in the skin the bursa can become infected, this is called infected bursitis.

Kneeling daily for extended periods of time or being sedentary increase the risk for prepatellar bursitis.

Symptoms of prepatellar bursitis are:

Bursitis of the knee can be treated by draining the bursa sac and in cases where infection is possible, an antibiotic is prescribed. In mild cases, resting the site along with ice therapy and anti-inflammatory medication may work just fine.

Now you’ve had a tour through the knee joint and can appreciate the many intricacies of the anatomy and associated injuries. Do you have clients with knee injuries or complaints discussed in this article?

7. Mechanics of human joints” Physiology, Pathophysiology, and treatment. Unsworth, A. 1993

About the Author: Beverly Hosford

Beverly Hosford, MA teaches anatomy and body awareness using a unique method that involves a skeleton named Andy, balloons, play-doh, ribbons, guided visualizations, and corrective exercises. She is an instructor, author, the NFPT blog editor, and a business coach for fitness professionals. Learn more about how to align your business with her coaching guide, Fitness Career Freedom and your body with her Fundamentals of Anatomy Course.